On this episode of Agents Unfiltered, we’re diving into some spooky real estate stories that you do not want to miss!

“I close the barn door and all of a sudden there is a knock from the inside of the door I just closed. But there’s still 3 rooms to show them over FaceTime…” READ ON!

When you go into as many houses as we do, you are bound to have a spooky experience! Here’s some of our best spooky stories (related to life and while showing houses).

It was a ghost! Stories from our past:

Ali P. : A friend took a photo and when it got developed her (dead) mom was in the photo

Danielle L. : No one was in the house and we heard steps so I thought my friends got home early so we unlocked it and no one was there. I remember hearing the steps.

Cassie D. : My first spooky real estate story was from before I was an agent. (Danielle) I had a listing that was sitting for a long time. The house itself didn’t have good energy. There was a pretty nasty divorce going on and there had been domestic violence that went on especially in the basement. Cassie wasn’t licensed, so I asked if she would come with me and clear out some of the bad energy. We went into the house around 7:00 so it was late and in certain rooms you just FELT IT. We tried to clear out the energy with sage and frankincense. So we work our way down to the basement which felt very heavy. We went back upstairs and had left all the bedroom doors open, but turned off the lights and felt the need to go back up. One of the rooms was closed and there was a stool on the other side of the door and we couldn’t open the door. CREAPY. We needed to get out. If Cassie wasn’t with me no one would have believed it.

My next one (Cassie) was when I was a licensed realtor and this had HEAVY ENERGY. I was in a tiny, dinky town doing a virtual showing. I couldn’t FaceTime them so I took a bunch of videos and I felt really yucky and unsafe. I went upstairs and in the video you can hear my voice get really high and talking really fast as I am zooming through the upstairs. There was an office that was pitch black and there was light so it shouldn’t have been that dark. The clients decided to put an offer in. We went and cleared the space because I couldn’t in good conscience let my buyers go into it. We looked it up after and the owners had lived there their whole lives and the patriarch had died in that home. Then I got a call from a lawyer asking if I remembered the house and he said can you tell me if the back door locks were in tact or broken. I think I remembered them being broken and he said he was dealing with my buyers in a DV situation not long after they moved in if the door was kicked in. I gave him the inspectors name and the whole energy of the house didn’t feel good.

I have one that isn’t creepy energy but just creepy and disturbing in general. I showed a home locally. I had shown multiple homes and we were looking at older homes. Main level is redone and we went into the storm cellar and we were walking down there (I don’t go in basement with clients for security) and my client jumps and screams and there was a cage and a skeleton of an animal. THEY LEFT IT THERE! It was awful. I think the people who owned it bought it to flip it, but did they not go in the basement?! I told the listing agent because they asked me what I thought. So disturbing.

Get ready for Cassie’s SCARIEST real estate story ever (another over FaceTime situation) with a remodeled home. She didn’t feel alone in the house, but (thought she) was…

LISTEN TO THE SECOND HALF OF THE EPISODE

ABOUT US -🎙 Agents Unfiltered is a podcast with the goal of connecting and building community between realtors nationwide. Get ready for some relatable and relevant information about “The Do’s, the Don’ts & the What The Fuck’s of Real Estate.” 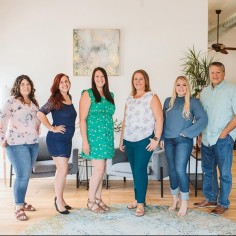